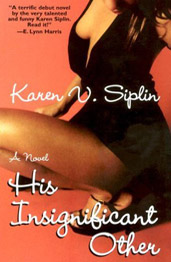 Until three months ago, Casey Beck was satisfied with her life as an adjunct film professor, living in her parents' condo and dating John Paul, the "perfect man." Then the "perfect man" admitted he slept with his ex-girlfriend early in their relationship.

Now, Casey is celibate as the result of her boyfriend's indiscretion and on the road to recovery when, without warning, the ex-girlfriend returns. Suddenly Casey finds herself doing a dance of possession not even she knew she was capable of. But is winning the dance more important than preserving her relationship?

Karen V. Siplin makes an explosive debut with her masterfully realistic tale of the predicaments a single professional woman encounters as she approaches the age of thirty. New York adjunct professor Casey Beck does not realize how draining and predictable her friendships, relationship and job have become until her boyfriend's ex-lover comes back into town and asks to stay with her. Casey is faced with a complicated choice between fighting tooth and nail to keep her boyfriend and some semblance of security and letting go of him only to steer her life into a completely new direction. This touching urban tale of a young woman's journey to self-acceptance will delight and excite readers.

It is a clever, well written novel that is entertaining and a pleasure to read. While the subject is serious, there are some scenes that will have you laughing out loud. It is a very realistic look into the lives of twenty-something people.

Review by Alice Holman of The RAWSISTAZ Reviewers

Casey chases around town trying to keep up with Mali's and John Paul's whereabouts and potential reconciliation, decidedly resisting his protestations of innocence, debating whether or not to exchange her three-month celibacy for revenge sex, and wondering what to do with her so-called career. She meets friends for drinks, eats, and backbiting gossip in a swirl of clubs, bars, bistros, and cramped apartments. Siplin's delightful debut novel sports a multiracial cast of characters and contemporary urban sensibilities.

His Insignificant Other is a deftly written novel that's hilarious, sentimental and sad. Hilarious because it shows that when people lie about their feelings they do truly triflin' things. Sentimental because sometimes taking chances means divorcing yourself from bad things, even if they are familiar. And sad because Casey, like many of us struggling 20-somethings, is bright. But she'll remain stuck in mediocrity unless she finds the confidence to break away from the crowd, follow her gut and set her own parameters for perfection.

The battle between the sexes rages on. His Insignificant Other is a terrific debut novel by the very talented and very funny Karen Siplin. Read it!

His Insignificant Other is wonderful! A comical, refreshingly honest look at the drama that surrounds getting and holding on to 'the perfect one'. Not only will you stay up all night to finish it, you'll probably stay up a few extra hours sorting out your own relationship issues!

With temperatures soaring to 100 degrees, a day at the beach is in order. All that's left to decide is what to bring to read. His Insignificant Other may be just what you're looking for. It's a shot of Bridget Jones's Diary mixed with a twist of The Best Man... Insignificant contains all the right ingredients to distract you from your own daily goings-on. And sometimes, that's exactly what the doctor ordered.

Siplin shows a lot of promise here... future books will be worth a look.